With the passing of KIP-19, KeeperDAO officially approved sunsetting the liquidity pools (“LP”) product and ended associated ROOK emissions. This KIP also estimated that approximately $5M of each asset type should be kept in these pools to be used for flash loans by our Keepers as part of their efforts. For context, the schedule below presents our current position as of today within these pools:

Using the initial estimates of preserving $5M per asset, KD would be limited in scope of executable investment and partnership opportunities by not having access to roughly $25M in capital.

To set the stage for the examination of these questions it is useful to point out that the only source of future revenue on pooled assets following KIP-19, will come from returns generated by internal Keeper arbitrage transactions (i.e. transactions that require borrow calls (flash loans) to be profitable).

Additionally all analysis below is conducted on a mark to market basis, transactions and positions in USD are valued at daily close prices. Valuations requiring spot reference prices are marked on the close of the 14th of April 2022.

The five V4 smart contract staking pools were deployed in June 2021 to mainnet and have subsequently resulted in a total of 19,537 successful “borrow” calls to facilitate flash loan events by 132 unique borrowers. Of the 19,537 “borrow” events, internal Keeper arbitrage activity made up only 2.1% or 414 transactions. Given third party flash loan activity does not contribute to the DAO’s revenue (there is no fee for borrowing) or the future revenue opportunity set, we will exclude all third party transactions from further analysis and only consider internal Keeper borrow activity. 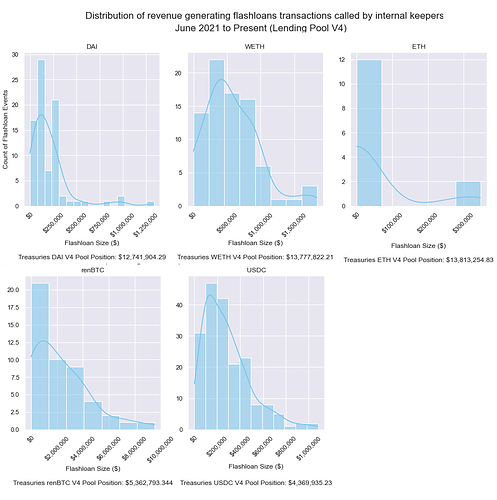 Figure One. Distribution of lending events by size for all internal Keeper transactions

Figure One illustrates the frequency of “borrow” smart contract calls by internal Keeper. This is split by asset type against the quantum of the asset flash loaned. A striking detail is that the majority of borrow events are for low values. It is worth highlighting that the treasuries ETH pool of approximately $13,800,000 has been effectively totally unutilised since inception, with only two material borrow transactions of approximately $300,000 having been made since June 2021. Across all of the pools there is a recurring theme that only a small portion of the allocated capital is being productively utilised. 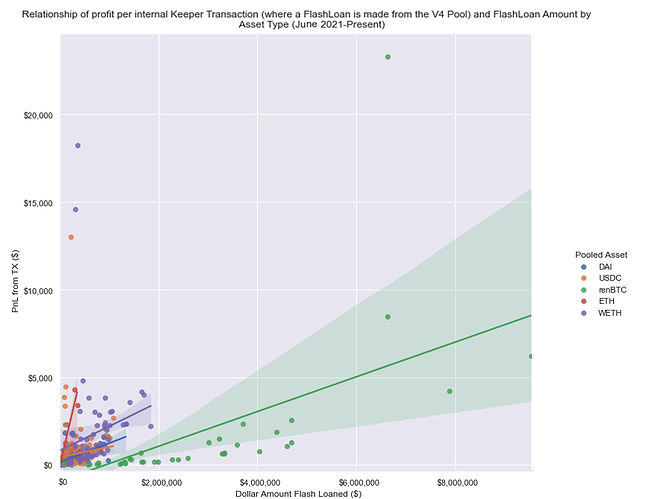 The table above aligns balance sheet equity deployed and the life to date revenue generated by each V4 staking pool from internal Keeper arbitrage transactions. As this analysis is a point in time assessment about capital allocation we need to only consider arbitrage revenues from the internal Keeper and we can ignore the now discontinued Rook emissions as a possible revenue source. Additionally only revenues from the V4 pools are considered and extrapolated as a proxy for the future revenue opportunity set. This assumption is based on the fact there have been significant changes in underlying onchain arbitrage dynamics since the V2 and V3 pools were active and retired, making them less useful as sources of prediction about future revenues.

At the current run rate, of the approximately $50,000,000 deployed by treasury in the pools, the DAO stands to earn a return of equity of 87bp’s per annum or topline revenue of $435,746 per annum. This is clearly a poor return on the treasuries capital.

It is possible that there are other sources of external “value” not captured in the above metrics which flow through to the DAO directly or indirectly via other value channels. We (the KIP’s authors) welcome additional insight to augment the analysis.

This analysis uses a conservative cost of capital rate assumption of 6.5%. This level was chosen as it roughly aligns with approximately risk free return rates available via Rocket Pool or LIDO for beacon chain staking + a 100bp add-on for risk premia. The conclusions in this section are relatively robust to whatever the assumed cost of capital is, making its exact quantification less important and more illustrative. A scenario analysis is presented below (see: Figure Six) for multiple rates of required return (RoRR’s), of between 3.5 to 11% which confirms the lack of sensitivity of this number to the net conclusions for this KIP.

Currently the capital deployed to the pools are earning approximately 0.87% Return on Equity (RoE), this is well below achievable return available on low risk staking or yield farming strategies.

The charts in Figure Four visually depict the relationship between every incremental dollar allocated to a V4 pool (x-axis), and the revenue that is possible to be generated from that incremental dollar (based on an extrapolation of V4 internal Keeper transactions to date) in blue, RoRR - which is a linear function (assumed here to be 6.5%) in red. Higher or lower assumptions of the required rate of return increase/decrease the gradient of the red line. 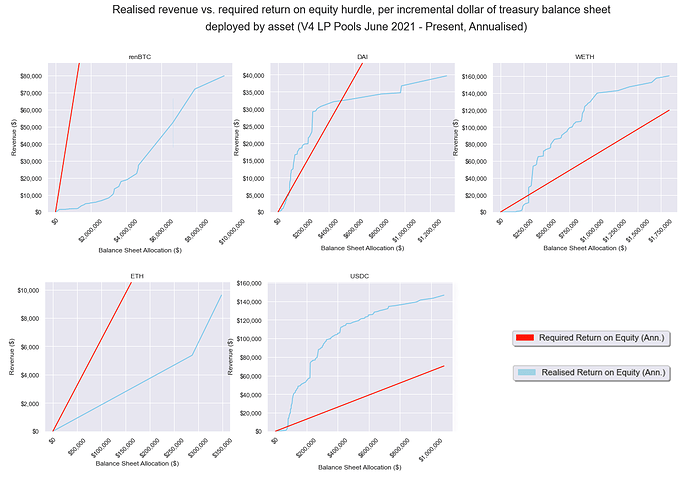 Looking at the renBTC pool it is possible to state that there is no scenario where the resources allocated to the pool are likely to exceed even a conservative RoE hurdle, this is illustrated by realised profit per dollar of equity (blue line) always being below the RoRR (red line). The implication is no treasury capital should be allocated to the renBTC pool, as the amount of capital required to catch a few small opportunities does not warrant the outlay.

The DAI pool meets its cost of capital in the region of where the realised return of equity runs above the required return of equity. The optimal point of equity to maximise RoE is approximately $438,000, i.e. where the lines intersect each other (assuming a cost of 6.5%), moving further out on the x-axis yields no additional revenue benefits after accounting for opportunity cost.

The WETH pool meets its RoRR at all points, and capital allocation is only bounded by the maximum borrow opportunity seen ($1,840,000), this allows us to form an assumption about the upper bound of future opportunities and the capital required to capture them. As discussed in 1) the ETH pool is largely unutilised, this is apparent again as the RoRR at all points exceeds revenue from flash loan events. No capital should be allocated to a ETH pool in the future, as it is made redundant by the existence of the WETH pool.

Lastly looking at USDC, similarly to the WETH pool, at all points this pool meets a conservative RoRR and the capital allocated should be bounded to the maximum trade opportunity previously seen of $1,082,000

To determine the optimal amounts of treasury assets to leave allocated in the pools, a optimisation problem is specified, namely solving two objective functions; firstly maximising flash loan revenue per $ of incremental capital deployed and secondly minimising the opportunity cost (i.e. drag on treasuries balance sheet (RoRR’s below)). The results of this are presented in Figure Five across a variety of RoRR assumptions.

Breaking out the conservative scenario of 6.5% Figure Five,

It is clear that despite whatever the RoRR or cost of capital that is assumed, there are multiple benefits (improvement of RoE, improved top line revenue and optionality gained from freeing collateral etc) to be had by reducing and rebalancing treasuries assets in the V4 pools.

Optimally rebalancing the V4 pools (assuming 6.5% RoRR), means there would be no forward allocation to the BTC pool, or ETH pool. The WETH and USDC pools would see their allocations constrained to the maximum financing requirements seen for arbitrage opportunities life to date. Lastly the allocation to the DAI pool would be reduced to the point where the incremental cost of capital required does not exceed the expected net revenue gain (approximately $438,000 of capital). The proposed rebalance detailed in Figure Five and Six transforms the expected RoE of treasurys positions in the V4 pools from 0.87% to 10.08%, this reduces topline arbitrage revenue by approximately $96,000, but yields an uplift from redeploying capital of approximately $3,000,000.

Based on new data derived from some very large flashloans, it was determined that a total of 767 WETH should be held back in the positions.