An update on Rook's Sophons in v2

Work on v2 of Rook’s governance has proceeded along two intersecting paths. The first is developing and revising a set of formal KIPs as well as other documents on the Governance notion page (set to public), and the second is isolating pieces of the process and collaborating with the community around their development in the governance workshop. Both paths have been necessary to get to the point where they can converge on more public discussions of specific changes in a forum that reaches beyond the workshop. This post is a step in that direction.

This post addresses one of the central components of Rook’s governance: the Sophons. It begins with an overview of the kinds of changes we’ve proposed, and also lays out some further pieces that need refining as a final step in developing a fully scoped process. Those pieces will appear in subsequent forum posts.

What do we want from Sophons?

The community has consistently expressed a desire for a refinement of the Sophons’ responsibilities across several areas, as well as an increased participation and presence in the governance process.

Working from these general requirements, we’ve been working on specific questions of implementation as a community during workshops, as well as in some basic blocking and tackling around the governance process as a whole. Through this work, we’ve arrived at a set of criteria for Sophon engagement summarized in the visual below. The image moves forward in time from left to right, beginning with proposal development and ending with a decision about the proposal. 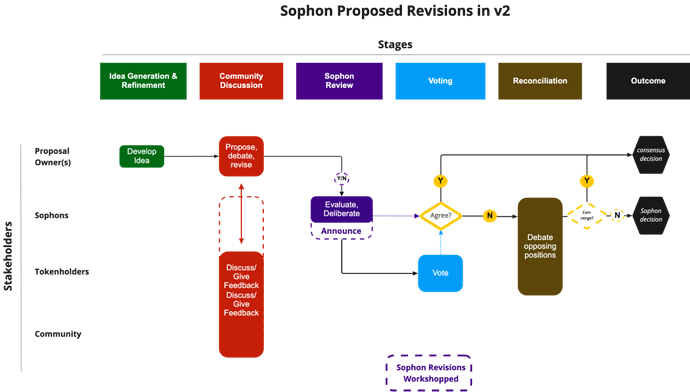 More specifically, here are the set of expectations for a revised role for the Sophons, which I have included in the draft version of the KIP laying out the new Sophon framework. They include the following:

How do we get there?

While the expectations above can and likely will change as we move closer to formalizing them, they also raise a number of important questions that need to be addressed in order to make them feasible. We’ve discussed several in workshop, but will focus on two in particular this week:

The two posts following this one address aspects of these questions by describing the results of a poll of the Sophons themselves, as well as an initial set of decision criteria for discussion and refinement.